First of all, what is raising the bottom of chiffon cake?
Have you ever been baked like this? 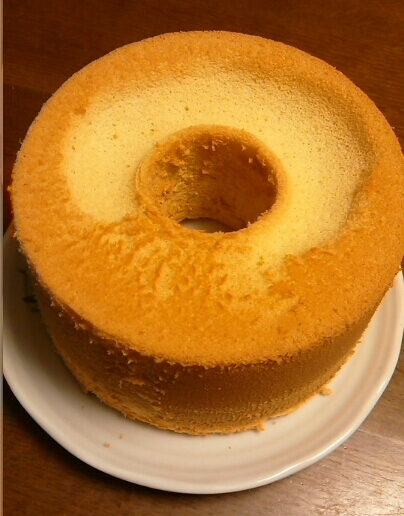 ⇩ Some donut-shaped chiffon cakes are raised and dented ⇩ 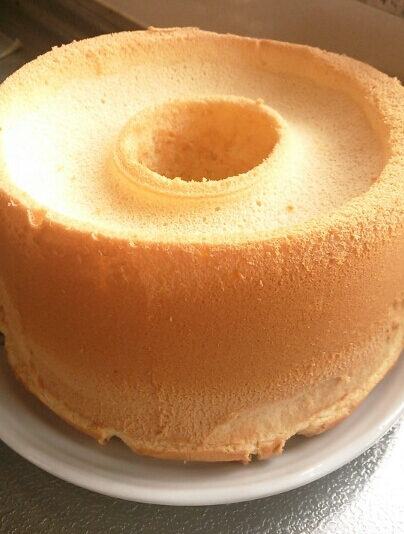 In this way, the state where the bottom part that is underneath when baking is dented when it is taken out of the mold is called “raising the bottom of the chiffon cake”.

Perhaps the most common mistake in making chiffon cake is raising the bottom.
Why is it such a raised state?

The causes of raising the bottom are roughly divided
1. Insufficient emulsification of egg yolk dough
2. Oven temperature is too high & too low
3. Other
There are three.

Cause of raising the bottom of chiffon cake
Part 1: Insufficient emulsification of egg yolk dough

There are two types of emulsification: the water-in-oil type, in which oil embraces water, and the underwater oil-drop type, in which water embraces oil.
When the oil is in an emulsified state (water drop type in oil), the dough does not stick to the mold easily, so the dough can be easily separated from the mold, which leads to raising the bottom.

The reason why an explosive chiffon cake that swells abnormally during baking is created is that the dough does not stick to the bottom due to this insufficient emulsification, and only the force to swell upward remains.

but···
The recipe for chiffon cake always says, “Mix well and emulsify the yolk dough” no matter where you look.

I think that there are more people who “mix well and are conscious of emulsification”, though to varying degrees.
Nevertheless, there is a reality that the failure to raise the bottom will not disappear. .. ..

One of the reasons.
That is, the method of making egg yolk dough (emulsification method) varies depending on the recipe.

I’m following the recipe, but it doesn’t work!
Even though I mixed it well, I raised the bottom! I think there are so many people who say that.

I have also failed many times by “mixing well” according to the recipe.
I couldn’t escape from raising the bottom even if I mixed it well enough that my hands hurt and the dough foamed properly.

At that time, I continued to make too many mistakes, saying, “Insufficient emulsification is the cause of raising the level of chiffon cake! In order to prove that, I was eager to raise the bottom and mixed the egg yolk dough with a rubber spatula to intentionally create an under-emulsified state and bake it.

⇩ Click here for the chiffon cake at that time ⇩ 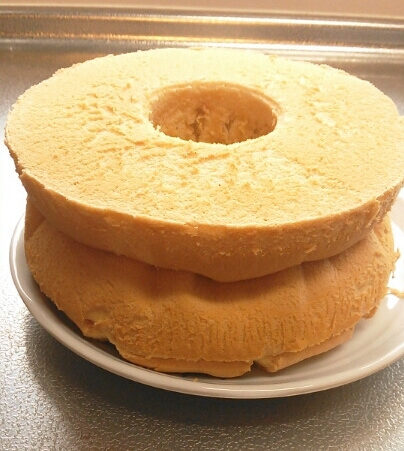 I have a terrible bend, but I haven’t raised the bottom. “The cause of raising the bottom is insufficient emulsification,” I wanted to prove myself, but sometimes I didn’t raise the bottom … (surprise)

What I learned at this time.
That is, “the emulsified state may be relatively unstable.”

Why do I fail when some people make it with the same recipe and succeed?
I was pessimistic that it was my powerlessness.

In the first place, the materials (eggs, milk, powder) used are not in the same state (quality and water content) every time, and the emulsification method and the result are unstable.
It’s not that I (you) who failed is bad! !! There must be a suitable method for each! !! about it.

I think one of the easiest solutions is to mix the egg yolk dough with a hand mixer until it becomes whitish and thick.

Based on my own experience of trying various methods of making …

Because of the instability, I recommend using a hand mixer to make egg yolk dough (whipped until whitish and thick) to ensure a stable and successful chiffon.

If there was a person who made it manually using a whisk and repeatedly raised the bottom …
By all means, I would like you to try making chiffon cake with egg yolk dough using a hand mixer.

Cause of raising the bottom of chiffon cake
Part 2: Oven temperature control

The most difficult thing for me is this “oven temperature control”.

I think there are the following points to determine that.

If the bottom heat is weak and the heat conduction is poor, preheat and bake the whole top plate (or remove the top plate and bake), bake on a net instead of the top plate, and place directly (even in a rotating type oven, put a round plate) I think that it will be improved if you try (except for placing it directly on the turntable).

If the heating power is strong, lower the preheating temperature and adjust the firing time and firing temperature.
(I hear that the bottom raising was solved by making a notch in the upper part of the chiffon dough during baking.
I think this method is also effective if you are using a type of oven that has a strong heating power and the temperature inside the oven does not easily drop, but be aware that it may have the opposite effect if the type tends to drop in temperature. .. )

This is the most annoying part because the only solution is to grasp the habit of the oven.
If you can’t escape from raising the bottom even though you’re devoting yourself to making the dough, it’s most likely due to the oven.

The quickest solution is to buy an oven thermometer.

After listening to my own experience and the voices of many people … Is the preheating completion alarm of the oven less than 5% credit? I’m sure you will think that.

Ovens are devices that have their own quirks, so if you can’t escape from raising the bottom, I would like you to purchase an oven thermometer and check the actual temperature.

Raising the bottom of chiffon cake does not always occur due to the above two causes.

◎ First, oil with emulsifier!
When making chiffon cakes, I often see a note saying “I don’t use healthy oils”, but the correct answer is “I don’t use oils with emulsifiers”.
The dough making is not bad, and the oven temperature is not bad, but the bottom is raised! If so, you may want to look at the label on the back of the oil package that has been used once to see if any emulsifiers have been added.

Next, about air mixing at the time of molding.
⇩ If air gets in when putting in the mold Part 1 ⇩ 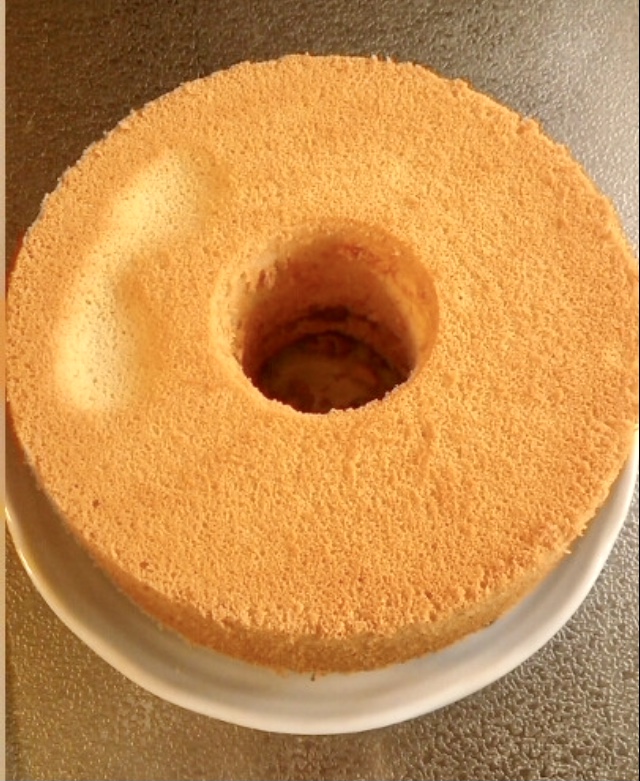 ⇩ If air gets in when putting in the mold Part 2 ⇩ 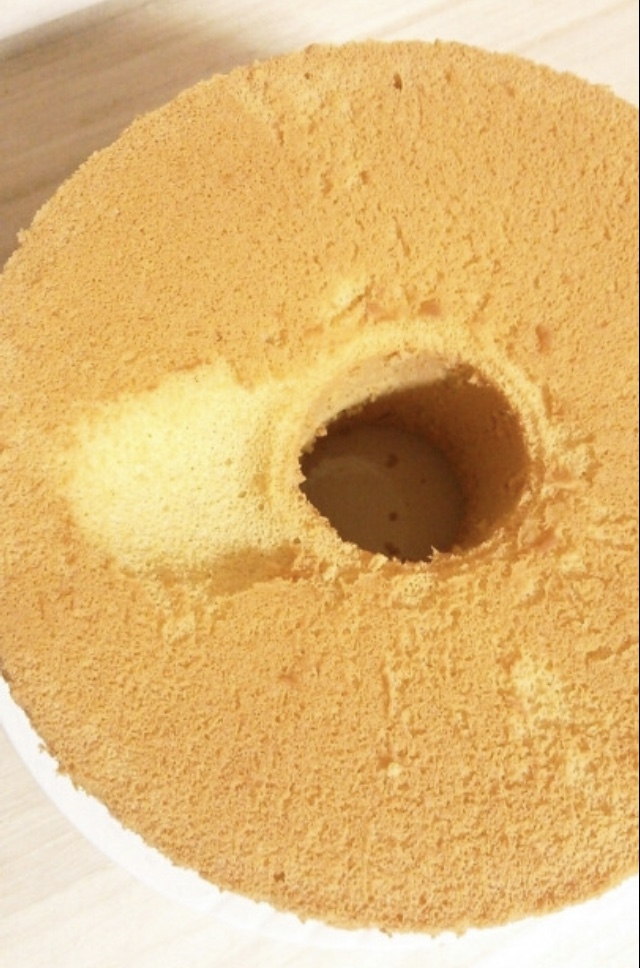 This kind of bottom-up often occurs when the final dough is thick and firm, and the dough fits into the mold.

Finally, about the lack of mixing of the final dough.

If there is unevenness or insufficiency in the mixture of egg yolk dough and meringue, it will lead to the water and oil content scattered throughout the chiffon dough and the instability of its emulsified state, which may eventually lead to raising the bottom (probably).・ ・ ・)

If not only air is simply introduced, but also insufficient mixing of the final dough is combined, it will add to raising the bottom, causing shrinkage, large holes, and meringue residue. 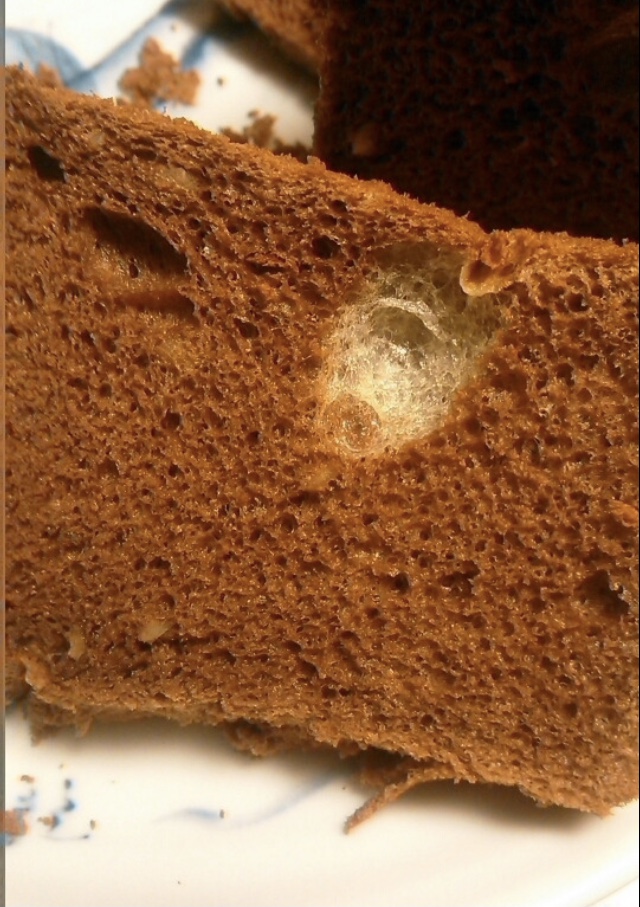 Summary of how to eliminate the bottom raising of chiffon cake

How was it?
There is more than one cause for “raising the bottom”, and some people may find it difficult because there are many things to be aware of.

So a simple solution!

◎ Use a hand mixer to whisk the egg yolk dough until it becomes whitish and thick.
◎ Warm water and oil to make it easier to emulsify.
◎ Mix egg yolk dough and meringue evenly and carefully
◎ Introduction of oven thermometer

These are the above four points.

So, “If this happens, it will be solved immediately! !! There is a part that cannot be said, and I think that is the difficulty of chiffon cake.

So I think there are some causes and solutions that I haven’t noticed yet.

If you notice something, we will update and change the contents each time, so feel free to contact us on Twitter … (* ^^ *)

Chiffon cake failure pattern 3rd-Broken waist- Failure of the third chiffon cake. "Broken waist" Bent waist means that the side part of the chiffon cake taken out of the mold is bent. Why does such a "breaking waist" occur? 6 main causes 1. The meringue is weak 2. Insufficient mixing of final dough 3. Insufficient baking / low oven temperature 4. Excessive water 5. Molding is quick (it wasn't cooled properly) 6. Others (recipe) (insufficient emulsification of egg yolk doug...

How to make a Plain Chiffon Cake Recipe. From the origin of the chiffon cake recipe, preparation, procedure of how to make, tips and points that will not fail, voice of making it is released! This recipe is recommended for those who are suffering from bottom raising, clogging, and shrinkage. Please enjoy the plain super fluffy chiffon cake recipe with vanilla scent!

I'm an aged around 40 housewife who mainly makes chiffon cakes. Living with a husband, 3 middle daughters, 2 middle sons, and a 2 year old second daughter. A step family of remarriage with children. Recently I found myself an HSP! I would be happy if I could connect with people who like cooking, making sweets, step families, raising children, and HSP.

error: Please refrain from secondary use such as diversion and posting of recipes and images.
Copied title and URL