Many chiffon cake failures following the raising of the bottom. 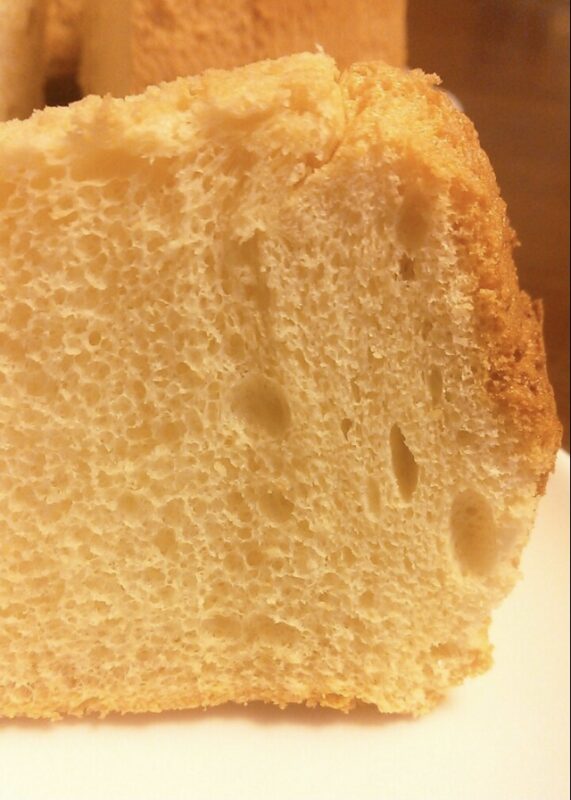 As shown in the photo, shrinkage / jamming means that the upper part of the chiffon cake (the one that is on top when baking) is tightly packed unlike the other parts of the chiffon dough. increase.

Then why does shrinkage and clogging occur?

There are five main causes

1. Not enough baked
2. The steam is not removed immediately after baking.
3. There is unevenness or lack in the mixture of egg yolk dough and meringue.
4. Excessive water
5. After firing, it was turned over and did not cool down.

A chiffon cake that swells greatly during baking.
Even after the expansion of the dough stopped, “expansion of air” and “evaporation of moisture” continued in the bubbles during baking, and the swelling gradually withered toward the baking, and when it settled down to some extent. Is baked. (Reference ⇨ Science of sweets “kotsu”: from Masako Kawada)

However, if the baking is insufficient, the evaporation of the expanded air and water will be stopped halfway.
As a result, the remaining air and moisture will crush and deflate the air bubbles at the top of the chiffon cake.

Actually take a picture and use it as a guide for baking. 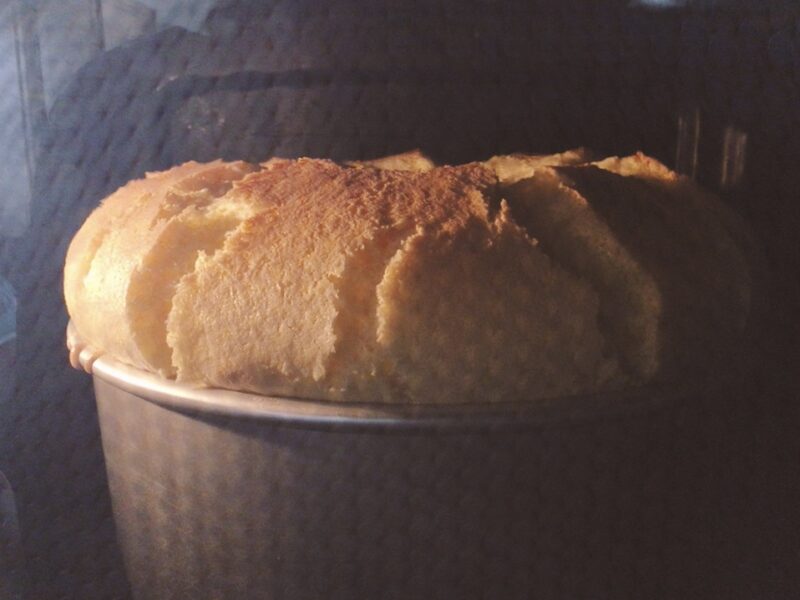 ↓ One minute before baking, the swelling settles down to this extent ↓ 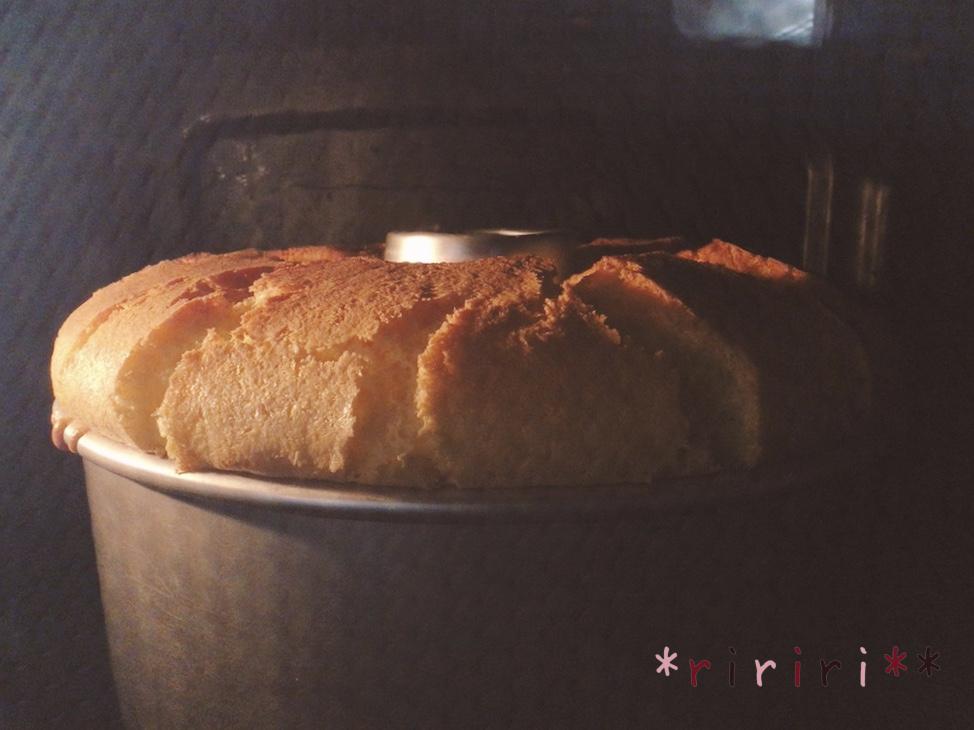 However, the process of calming down this bulge is accompanied by the anxiety of the creator!

When I was watching the chiffon cake, which was getting smaller and smaller, even though it was swelling nicely, I was like, “Is it okay? I have to get it out soon! I get the feeling.

But be patient here! !! !!
If it is not baked enough, it will eventually deflate for the above reasons.

The solution is to bake the dough until it swells to the maximum, then the swelling subsides and it takes about 3 to 5 minutes.

At this time, if the upper part of the chiffon cake is likely to burn, you may want to lower the temperature and continue baking or cover it with aluminum foil.
(If that alone does not improve or if it seems to be severely burnt,
It will also be necessary to review the initial preheating temperature and firing temperature / firing time.)

If you have no problem making egg yolk dough and meringue and only shrink it, please be aware of this lack of baking.

Bake well!
If there is no problem in making the dough, I think that this will solve most of the problems.

Causes of shrinkage / jamming # 2: Steam is not removed immediately after baking

After the chiffon cake is baked, there is a method of dropping the mold vertically from a height of about 10 cm only once to give a shock and remove excess steam.

The chiffon dough is baked in the oven by deflating it by about 1/3 from the bulge of MAX, but if this steam is removed, it will deflate to about half the bulge.

But it’s okay! !! No problem! !! !!
From experience, if you cool the cake without removing the steam, the surface of the chiffon cake will gradually wrinkle and deflate, resulting in shrinkage.

I feel lonely that the height disappears at once, but …
If you are suffering from shrinkage, please try steam removal once, thinking that you have been deceived.

👉(Click here for details on how to cool the chiffon cake)

In making the final dough, we will mix the egg yolk dough and the meringue,
If there is not enough mixing here, the meringue will cause the meringue to swell more than expected during firing.

It is important to mix the meringue so as not to crush it, but as a result of being too careful not to break the meringue, the skeleton (yolk, gluten, etc.) that supports the large swelling egg white is insufficient and it shrinks as a result. Will be.

If the final dough is uneven, the unmixed meringue will be hollowed out or crushed, causing shrinkage.

The solution is to “increase the mixing of the final dough”.

The finished state of the final dough depends on the flavor, so it cannot be said unconditionally.
I think it’s a good idea to mix the dough until it is glossy and has a certain degree of fluidity (a dough that is firm enough to be poured into a mold). 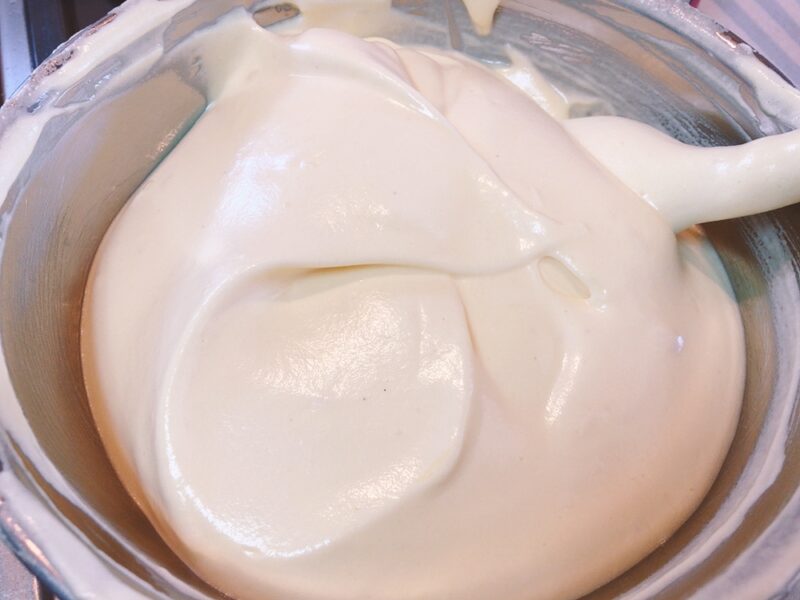 ↓ The place where it was poured into the mold. How hard it is to pour into a mold from one place ↓ 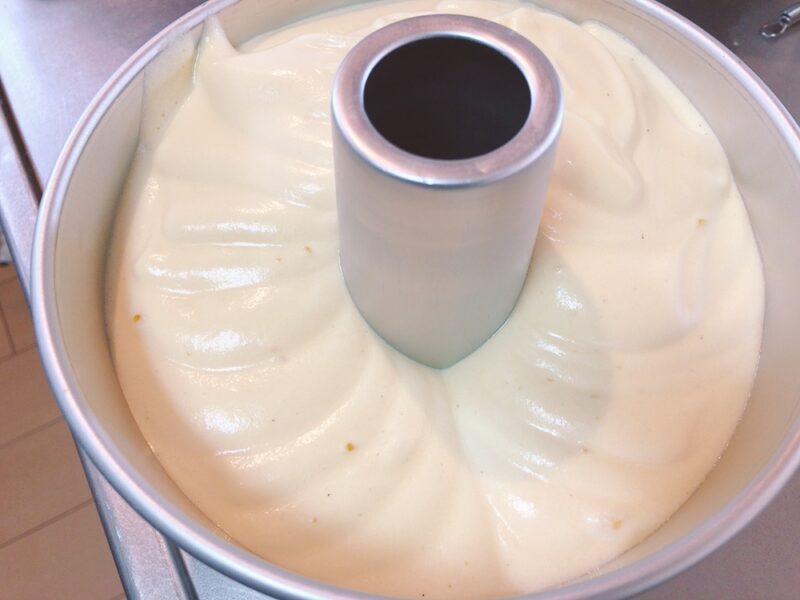 This is a case where there is a problem with the formulation, and if there is too much water, shrinkage will occur.
The most common is chiffon cake, which contains fruits and vegetables such as bananas and squash.

Even if you weigh it properly according to the recipe, you need to be careful because the moisture content of the ingredients changes each time.

As a measure that does not fail (especially for beginners making chiffon cake)
Reduce the amount of water and do not mix it at the last minute.

The way to get closer to the ideal success chiffon is to make a note (remember) the appearance of the material when it was baked well (in the case of bananas, was it ripe enough to crush quickly, or was it rather firm?) At the same time, remember the finish (hardness, stickiness) of the yolk dough.

Even so, if the finished egg yolk dough is sticky and watery (when there is obviously a lot of water and a failure comes to mind), there is sometimes a rough job of adding additional flour ^^;
(Surprisingly, I think it’s most important to have fun making it because you can make delicious food when you do such a rough business (* ^^ *))

↓ And if the amount of egg white is too much, it will shrink ↓ 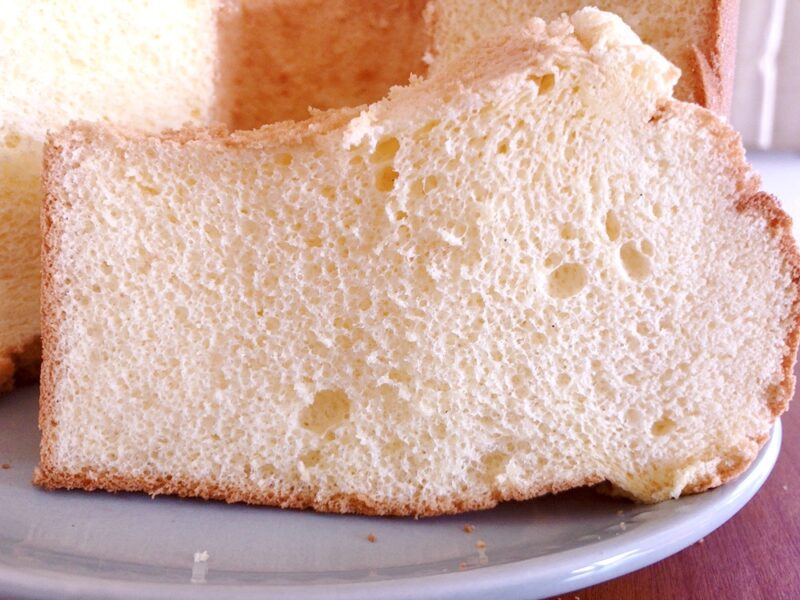 This chiffon cake is a vanilla chiffon cake that I usually bake with only egg whites added.
There is a slight burn-out at the top, and the other parts are too soft.

Also, be careful when using eggs in the summer.

Eggs (egg whites) in the summer contain more water than usual.
Therefore, the finish of the meringue will change, and the baked chiffon cake will also be affected.

The solution is to “measure the amount of egg whites every time” and “if the egg whites look watery, such as in the summer, use the power of dried egg whites or cornstarch”
(* ^^ *).

Causes of shrinkage / jamming # 5: After baking, it was turned over and did not cool.

Chiffon cake is a very soft candy that can finally retain its shape by sticking to a mold and baking it.
Therefore, when it is taken out of the oven after baking, it is immediately turned over and cooled to prevent the dough from shrinking due to gravity.
However, if you cool it without turning it over here, gravity will be applied to the part that protrudes from the mold and swells, and it will shrink.
Shrinkage will occur where it is deflated.

The solution is “when it’s baked, be sure to turn it upside down and let it cool.”

Causes of shrinkage / jamming # 6: Others

The last cause of shrinkage.
This is a shrinkage caused by a combination of failure factors. 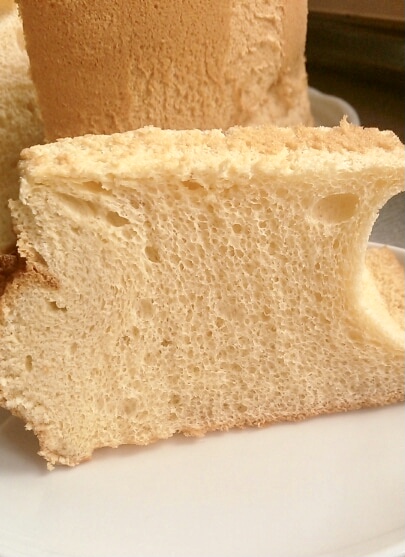 In addition, if the factor of meringue failure is also included, it will be a triple bitter chiffon of Henna Henna’s “bottom-up stiffnessless shrinkage” (T_T) ↓ 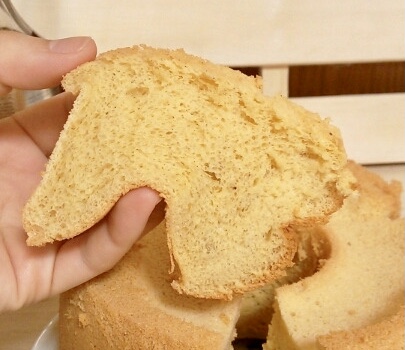 There are various causes for shrinkage.

So a simple solution! !! !!
1. Bake well
2. Remove steam immediately after baking
3. Mix the final dough until it is evenly glossy (the fluffy final dough is often not enough)
4. Do not add too much water (introduce dried egg whites depending on the condition of the egg whites)

After that, do not make multiple mistakes.
Be especially careful of “insufficient emulsification in making egg yolk dough” and “insufficient meringue”.
Failure to emulsify and meringue has an almost 100% chance of shrinking.

How was it? ??
For those who are suffering from shrinkage and clogging, I hope it will give you some hints (* ^^ *)

* In this article, we have written in detail about shrinkage and clogging, but the parts to be careful of will change depending on the state of shrinkage, so for reference ↓

If you notice something, we will update and change the contents each time, so feel free to contact us on Twitter … (* ^^ *)

How to make a Plain Chiffon Cake Recipe. From the origin of the chiffon cake recipe, preparation, procedure of how to make, tips and points that will not fail, voice of making it is released! This recipe is recommended for those who are suffering from bottom raising, clogging, and shrinkage. Please enjoy the plain super fluffy chiffon cake recipe with vanilla scent!

Chiffon cake failure pattern 3rd-Broken waist- Failure of the third chiffon cake. "Broken waist" Bent waist means that the side part of the chiffon cake taken out of the mold is bent. Why does such a "breaking waist" occur? 6 main causes 1. The meringue is weak 2. Insufficient mixing of final dough 3. Insufficient baking / low oven temperature 4. Excessive water 5. Molding is quick (it wasn't cooled properly) 6. Others (recipe) (insufficient emulsification of egg yolk doug...

I'm an aged around 40 housewife who mainly makes chiffon cakes. Living with a husband, 3 middle daughters, 2 middle sons, and a 2 year old second daughter. A step family of remarriage with children. Recently I found myself an HSP! I would be happy if I could connect with people who like cooking, making sweets, step families, raising children, and HSP.

error: Please refrain from secondary use such as diversion and posting of recipes and images.
Copied title and URL